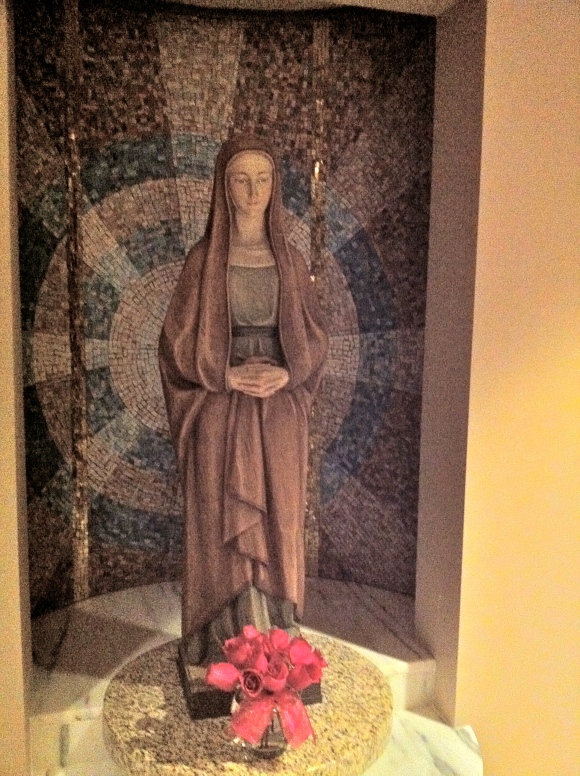 Mother Mary, at St. Monica’s, was really where the story of Mike and I began, happening at the same time as my Mom’s illness.

Last night we visited Our Lady, in remembrance of Mom.

A mingling of joy with tears, gratitude, love, petition, thanksgiving…just laying it all out before Our Mama. 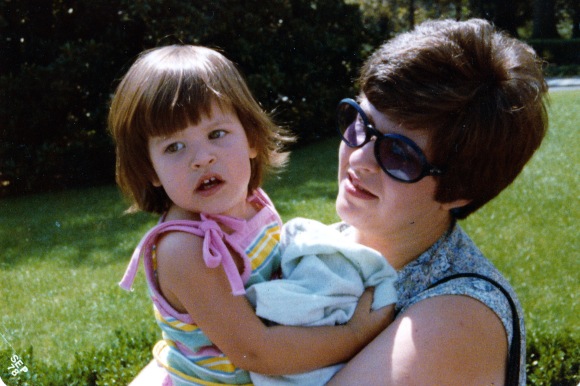 Me as a toddler with my beautiful Mom.

We celebrated your birth into this world two days ago. Today, we celebrate your rebirth into another.

It’s been two years without you, physically; but I’m grateful for the 30-something I had with you.

We love you, miss you, and are all better for having known and been loved by you.

The Circle of Life

“A circle is the reflection of eternity. It has no beginning and it has no end – and if you put several circles over each other, then you get a spiral.”
Maynard James Keenan

It was a restless night at my parent’s Florida home, two years ago.  My Mother was laying in her Hospice bed just beyond the room where I would attempt to sleep. Each day she continued to slip away from our world of interaction, lying on her back, saying little to no words.  She would lie waiting, still, hanging on, as she wanted to see him.

Nine months prior, Mom had been elated as any grey-haired Matron, to hear that wonderful announcement: Her oldest Son and Daughter-in-Law were pregnant! Meeting that baby was high-priority on her “Bucket List”, an important list since her second go-round with Cancer. Since the Cancer was in her bones this time, she knew the only cure was a miracle; yet, she had gracefully accepted whatever God willed very early into her diagnosis. Holding on to see that baby nine months later, I knew she was asking God for it to be in His will too.

Nine months prior, I excitedly thought that by living in the same city as one of my pregnant family members, it was my long-standing chance to be there during the birth of either a niece or nephew! My soon-to-be-husband (at the time) and I already had 8 nieces and nephews, and never had been close enough, locationally, when they were born to be able to glimpse at the wonder of their precious tiny newborness. (Yes, I know, newborness is not a word, but I liked it, so take that, spell check and grammarians.)

Those thoughts came way before everything had spiraled down too quickly with Mom’s health. We had seen what was needed at Christmas: Our hearts had desired to be there in her last days, so we decided not to return to Texas until after she passed. As Mom became more and more distant from the physical world—suffering, and slipping into a spiritual one that I’ve only dreamed about—the excitement and anticipation of baby Jacob’s coming consumed me. The few words Mom would utter during those days were incessantly asking for Jacob. Restless, we did not know then how dangerously close her time in fact was, and she needed to see him.

Jacob didn’t seem too eager about arriving, however. I’ve never gone through that time right before labor (yet), but things seemed slow-going.  Seeing how anxious Mom was getting, knowing that her Hospice Doctor had finally confessed she was in her final 2-weeks, I was anxious about when Jacob would arrive too. I called and spoke to my SIL, who I don’t think had slept in a few days, checking on what I hoped was progress.  Watching my Mother suffer was such a deep suffering for me, and with her holding on to see Jacob, my heart would continue to ache until he arrived and she could “see” him.

My SIL told me that she was doing everything possible to get the labor going, it just wasn’t happening yet. I probably broke down on the phone with her – that was quite common at that time. “Keep us updated, please,” I told her, even though they were. I began praying even harder…come on Jacob, we need you here…

It probably was about 8-hours later, when my brother called.  “Her contractions are about an hour and half apart. I’m getting her bags ready for the hospital…” he said.

Over-the-moon, I exclaimed, “You have to tell Mom the news! She’s been waiting to hear this!”

Turning on the speaker phone, hovering it over Mom in her bed, Paul gave her the long-awaited news.

She laid there, eyes closed, as she heard it. Yet I felt that there was something she wanted to say.

The room erupted in laughter. I had expected something profound, but it was funny as usual, even on her deathbed.

I never slept well during that time. The door to my room was always left open, just in case. I had drifted off to sleep for not too long, when I heard my mother’s voice amidst the darkness.

I jumped out of bed to go directly to hers. She laid there, with her eyes closed.

I tried to ask her if she was ok. She just kept repeating, “Seven.”

I lingered near her for awhile longer, and after a time, she was quiet. I eventually returned to bed.

A few hours later, very early in the morning, another call came from my brother.

“She’s having a tough time…exhausted…it will be awhile…contractions still not progressing close enough…”was the gist of the update.

“Yes, we will continue to pray,” I promised.

I proceeded to write a prayer request—here on my blog, and on Facebook—asking friends to join me in the quick and safe delivery petition. My amazing friends, as always, responded and prayed. I then went into my Sweetheart’s room, and asked him to pray with me. We both felt inclined to lift our arms, hands pointing towards heaven. A gutsy prayer began to form deep down inside, and forcefully came out of my mouth. In my mind’s eye, I had a vision of Jacob fighting with the Angel, from the Bible. I saw a tug-of-war happening in our prayers for his birth, my Mom as the Angel trying to wrestle him out while he struggled to stay safe and warm in his dear Momma’s belly.

I can’t remember the exact words of that commanding prayer, as things said from the soul are meant to be prayed and not remembered verbatim, but it was something like:

“Jacob! Be kind, and stop fighting with your Mother. Come out!! God, you are the author of life, make it so!”

We laid there, waiting, praying.  And about one and half hours later, not long after SEVEN in the morning, another update from my brother.  After our earlier conversation, some things had rapidly changed. The contractions quickly became so close together that apparently the Doctor could barely get there in time to deliver the long-awaited baby boy. A text came shortly after, with this precious photo. Jacob was here!! This is who we had all been waiting for, but most of all Mom.

Crossing the birth of her newest Grandson off of her Bucket List, Mom’s decline now was speeding like a bullet train. Her eyes were no longer opening, her voice could no longer be heard…her soul was still in her body, but that body was breaking down quickly. All I could do was be near her, trying to make her as comfortable as possible, giving my Mother Morphine. It was killing me.

My brother and SIL wanted Mom to see the Baby too. They Skyped with her and Dad, introducing Mom to her Grandson. Her eyes, that had turned inward, struggled to open and see. I couldn’t even stay in the room, it was too much for me.

Everything was happening too quickly. Jacob arrived on January 19th. We celebrated Mom’s 64th birthday on January 21st. The morning of January 23rd, shortly after a middle-of-the-night “Festival of Praise” over her (Dad, my other brother, Mike and I) she was called home.  “For both in life and death, we belong to God…”

There it was, before my own eyes, the circle of life.

After the funeral, Mike and I stayed with Dad a bit more, to help in those first couple painful weeks of the aftermath.

When we did leave what had now become only “Dad’s house”, it was another separation that caused me much suffering and grief. Leaving my Father to his grief, alone in the house that they had built together, the place where my Mother had lived and died. It was the second most tearful goodbye I had ever had, aside from that of my Mother two weeks prior.

I felt like a shell of a human being. Exhausted. Grief-stricken. I was returning home, after over a month, but I didn’t want to be there. I was finally engaged to the love of my life after years of waiting and praying—had wedding planning to do—but even that did not excite me.

On the last leg of that painful 2-day drive back to Texas, we decided to stop by to meet little Jacob. Arriving in their home, hugging, trying to come up with some words, I just wanted to hold that tiny, sweet boy.

A friend called this “Baby Therapy” when I posted this picture, nearly two years ago. Precisely. No Grief Group, book, journal entry, etc…could touch what my heart experienced in this moment. As I held him in my arms, love began to creep back into my broken heart. The feeling was so supernatural, even for this writer, there are no words to adequately describe it.

It’s the circle of life at work, with life well-lived going back to their Creator and new life springing forth to begin living.

In truth, there is no beginning, no end, as the circle continues.